Stabilizers and stabilizers pitching - devices whose role in ensuring safety and comfort is difficult to overestimate. Side rolling has a negative effect on the stability of the vessel, and under difficult climatic conditions of operation it can completely disrupt it and lead to a coup. The effect of pitching, depending on its intensity, also negatively affects to a lesser or greater degree the physical condition and well-being of people on board. The pitching itself is a change in the tilt of the ship to the left or right side under the influence of strong waves or wind, including a gale.

Stabilizing installations distinguish between passive and active. For mechanical stabilization or the so-called damping of pitching, side (zygomatic) keels and passive soothing tanks are used. Stabilization with keels does not eliminate pitching, but only slightly reduces its intensity, with the help of soothing tanks it increases the stability of the ship and helps to reduce the pitching amplitude of up to 50%. Soothing tanks - tanks with ballast water, which begins to oscillate during pumping.

“Active” rudders can be extended from the hull, and depending on the amplitude of the side rolling, change the angle, compensating for the lowering or raising of the left or right side. "Active" tanks, as a rule, are pneumatic systems consisting of interconnected containers filled with liquid. The principle of operation of such a system is based on the fact that during pumping, air is pumped into one of the tanks under high pressure, forcing the contained liquid into the other tank, thereby ensuring balance and stabilization. Such a system, for example, was presented by the Radar MMS company at an exhibition in St. Petersburg, one of the advantages, according to the developers, is the ability of the pneumatic system to not only stabilize the unwanted side rolling, but also to create it artificially, for example, when movement in the ice. 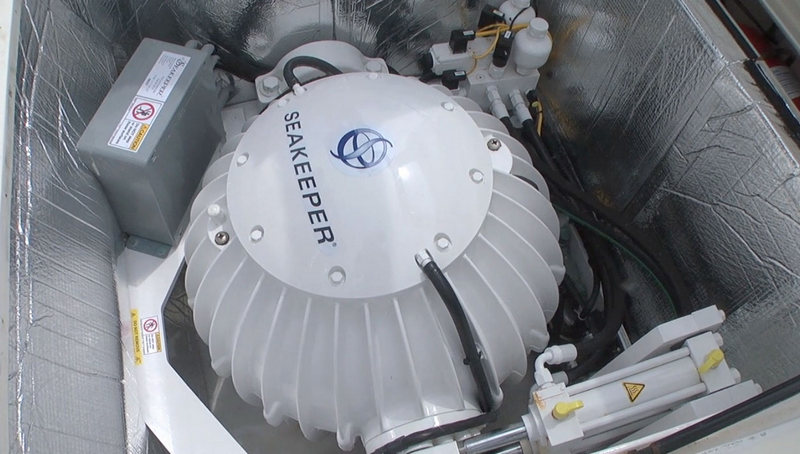 Gyroscopic dampers are powerful gyroscopes that rotate in a special frame, and during onboard rolling the gyroscope axis rotates, resulting in the so-called “gyroscopic moment” that helps stabilize the ship.

The Seakeeper gyroscopic damper is one of the most advanced devices for stabilizing the pitching of up to 90%. The device is installed both on vessels from 10 meters and on large ones: the Seakeeper model range is very wide, there are devices for various types of vessels, however, the cost of such equipment is very high. The operation of the damper is fully automated and autonomous, you only need to turn the device on or off, as well as familiarize yourself with the graphical display interface, which is designed clearly and simply. During the movement of the vessel, unlike passive stabilizers, the Seakeeper gyro swing damper operates in a constant mode at any speed of the vessel, automatically adapting to the amplitude of the roll.

Specialists at PDV Service take an integrated approach to ensuring the stability of the vessel while stationary and moving. Especially for each yacht, depending on operating conditions, technical specifications, as well as the owner’s budget, an individual selection of means and installations is carried out to stabilize the pitching. Our masters carry out the selection, installation, configuration, as well as repair of all rolling stock damper devices, diagnostics, and scheduled maintenance.